Viminacium was the largest and most important city in Moesia Superior. It was the provincial capital and military stronghold. It was built on a strategic location on the mouth of river Mlava and Danube, on the crossroad of both land and river routes with large military and trade potential.

Legionary fort of Legio VII Claudia pia fidelis was confirmed here and is the object of both archaeological excavations multidisciplinary research using several different methdods. Legio VII Claudia garrisoned here from the second half of 1st century AD throughout antiquity.

City was confirmed also as the base for river fleet – classis Flavia Histrica. 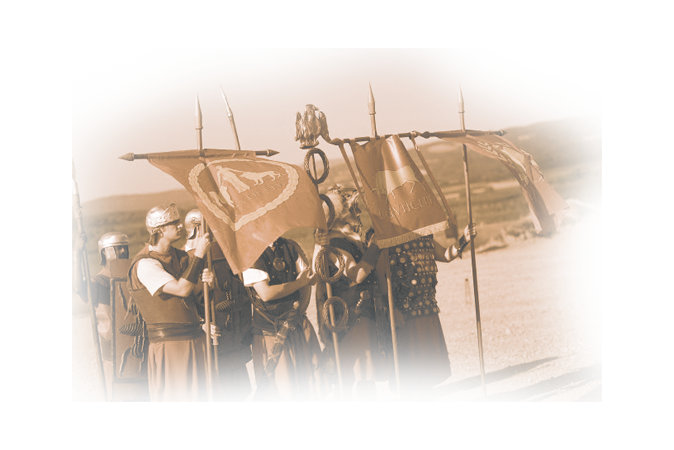 City was founded in the 1st century AD but its fast development could be related to Trajans conquer of Dacia. Only then full potential for trade could be developed and city multiples its population in several decades. Under Hadrian it becomes municipium (Municipium Aelium Viminacium). Its rapid expansion was hindered by large epidemic of plague during Marcus Aurelius. City recovers and was raised to the status of colonia in 239 under Gordian III. From this year for 16 years in the city operated its own mint that produced both local and imperial coinage with typical obverse. This obverse depicting young woman, personification of Moesia relying on the bull and lion (symbols of the Legio VII Claudia and Legio IIII Flavia) is one of the best examples of local military propaganda – province relies on its military forces.

Because of taking part in rebellions against Galienus mint was closed and both troops as well as civilian population suffered severe punishment. Abandonment of Dacia under Aurelianus was second, generally fatal blow to the city. It was again on the frontier exposed to barbarian harassment. All this combined with both military and economic crisis of the Empire started city’s decline. Emperors passed through Viminacium, but that could not ensure prosperity. During 4th century many buildings lost its primary functions or were abandoned. Heating system of the monumental baths was walled up and necropolis was formed within the amphitheatre. Garrison in the fort was reduced, so smaller force was not able to defend cities almost 4 km of defensive walls effectively.

Final destruction of the city was during Hun invasion in 441/443 AD as was the case with the whole limes forts and settlements. But Viminacium never recovered. Those who came back afterwards had no means to rebuild the city effectively. Justinian’s restoration was just a shadow of once proud Moesian capital. The advantage of Viminacium lies in the fact that after city was utterly abandoned after Avar invasion it was never rebuilt and now is in the middle of the fertile fields. Both legionary camp and hart of the Roman urban zone are open and accessible for all types of research and provide us with excellent possibilities for presentation. Although there are no visible ruins on the surface preservation of architectural remains underground is quite remarkable.

Finds that emerge from these fields are enormous. More than 40.000 objects were found during modern excavations. More than 30 tombs with most beautiful frescoes reveal art of local artists. Pottery and brick production centers are being restored in order to be presented to the public.

So far large parts of two aqueducts were excavated, amphitheater, porta praetoria of the legionary fort, monumental city baths and so on… But final curse of Viminacium remains in the story of modern coal production. Modern thermoelectric plant was built on the southern cemeteries of Viminacium, not far from the urban core. Coal mine that supplies this plant spreads over south east and east cemeteries, villas, suburban settlements, parts of aqueducts and everything else what might be in the vicinity. City is protected, but because of power plant and coal mine continuous protective excavations are focused on the city surroundings leaving no time or manpower to fully show once proud Moesian capital.

Directions to Viminacium from the Belgrade city center